That’s a smidgen of what local residents and plenty of visitors are discovering in town, a far cry from the shuttered businesses and empty buildings prevalent just a few years ago. Call it Bellefontaine two-point-oh, or a town refreshed. And at the core of the revitalization? Let’s just say one of the driving forces is, frankly, girl power.

About 75 percent of the new businesses ramping up the town’s core are owned by women – entrepreneurs who are pumping new life into a heretofore-fading downtown. That’s not surprising when you consider the statistics. Nationally, women-owned businesses are one of the leading forces driving the economy; in Ohio alone there are more than 306,000 female-owned businesses that generate more than $29 billion in revenues each year. 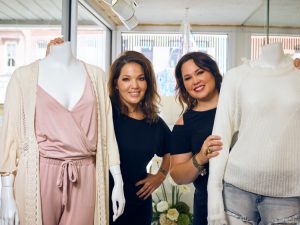 Sisters Hayley Palmer and Alysia Kuba are doing their part to bring the sparkle back downtown. The two took over the aging but beloved PeachTree Boutique in 2016, infusing it with new dazzle and glitz, and designing a dreamy space to shop.

“We relied on our imagination; we always knew who we were and what we wanted our store to be,” Alysia says of the sleek and stylish shop done up in shades of blush and black. “We didn’t mimic other stores. We wanted to do our own thing – not create just a good store for Bellefontaine … but a great store for anywhere.”

They also stayed true to their small-town roots.

“I choose to live in a small town, so why not just own that,” says Hayley. “There are a lot of millennials moving back here and we want to help create a new sense of community and pride in our town.” 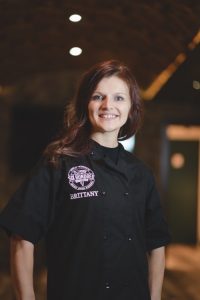 When her restaurant opened, she says, “There were very few businesses downtown; the foot traffic wasn’t here and there were empty parking places everywhere. Today, there are people walking around, shopping and going to restaurants, no matter what time of day it is or what the weather’s doing!”

It’s also attracting visitors from cities farther afield, like Troy and Lima, Columbus and Delaware. “People are driving through Dublin, through Marysville and through the countryside to come here. So we’re doing something right,” Brittany says.

Bellefontaine got much of its boost thanks to the sweeping vision and broad revitalization efforts of Small Nation, which develops places, spaces and dreams and rebuilds sagging small-town main-streets. In six years, more than 30 new businesses have opened their doors in 14 empty, historic buildings that were transformed and given a shiny new lease on life. The Small Nation team applies its “hustle hard” approach to revamp the buildings and help young entrepreneurs – like Hayley, Alysia and Brittany – launch their dreams.

“Small Nation scouted me for the business,” says Brittany, who worked for the pizza shop’s previous owner. “In six months I went from employee to owner, and became one of the first businesses to anchor the town’s revitalization plans.”

She says Small Nation “really stepped in to help me with the transition – everything from marketing efforts, rebranding, signage and social media to obtaining city permits for a sidewalk patio. Small Nation was the gateway.”

Today, she reflects on the sisterhood she has with the other business owners. “Downtown Bellefontaine is unique – we don’t see each other as competitors. We work as collaborators. We’re all around the same age, and our kids all go to school together. When we see opportunities to work together and support each other, we do.”

That goes for the other entrepreneurs, too. 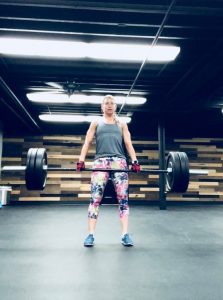 Lynnsey Ramsey saw a proverbial door open, and established Ragnar Fitness & Yoga studio downtown. “Here I am, a mom running a yoga studio in small-town Ohio. I never thought this would be my path, but I love it,” she says. “I’m living the life I’ve always wanted, being part of a community I can support.”

Beth Zell wanted to fill a void downtown and started from scratch to open her eclectic and comfy coffee shop, Sweet Aromas Coffee. “I wanted it to feel like home for the people in the community, with good smells, cozy sofas and chairs, and favorite surroundings. I’m really proud to see the how everyone has embraced it.”

Down the street Susie Jarvis founded her photography studio, The Photo Booth, when Small Nation and its vision for downtown provided inspiration, along with encouragement, mentorship and insight. Fellowship and support from the other women business owners helped too. “We’re all like a little family; we get to know one another really well, and we cross-promote each other’s businesses. We all understand the family-first mentality too.” 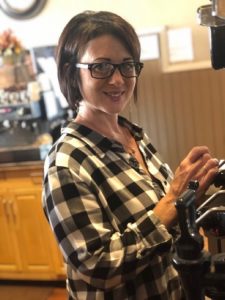 Recent collaborative events abound. Several early-morning Sip and Stretch classes have paired yoga from Ragnar Fitness with coffee and pastries at the Sweet Aromas space, where Beth and Lynnsey moved the furniture out, brewed coffee, did yoga and enjoyed coffee and treats with local women. “It was awesome,” Lynnsey says. “I was so excited to offer an opportunity for women to gather and decompress in a different kind of environment.” Other downtown happenings include a fall Pumpkin Parade, with proceeds supporting the Vets to D.C. fund, a holiday open-house and shopping extravaganza, and a summer auto show.

The business owners also cross-promote each other in more subtle ways. “When customers are in my store, it’s nice to be able to recommend restaurants and other shops,” says Beth Arthur, owner of Olde Mint Antiques. “It’s important to talk up your town with customers. People can sense that feeling of community.”

The walkable downtown helps too. “It’s a unique place,” says Angie Hall, who owns City Sweets & Creamery – a popular donut shop, bakery and ice cream parlor that Small Nation helped her launch. “People can go to the restaurants for dinner and then walk over here for ice cream and a sweet. The location is great, we’re all growing, and the businesses feed off one another.”

And that’s what cinches it for businesswoman Hannah Wischmeyer, owner of Rise Bakehouse. “The best thing about Bellefontaine? Absolutely the support from the other business owners. Most of us have kids and it’s a balancing act. It can be exhausting … but it’s also empowering.”

“At the end of the day,” adds Brittany Saxton, “we’re all out here doing the same thing.”