How big ideas and local food brought our small town to the White House.

In 2010, the Small Nation team began its mission to revitalize downtown Bellefontaine. Like many small towns across the country, the downtown was dying a slow and painful death. What was the first step in turning it all around? A business that would drive foot traffic throughout the day and into the night for something everyone loved: PIZZA. 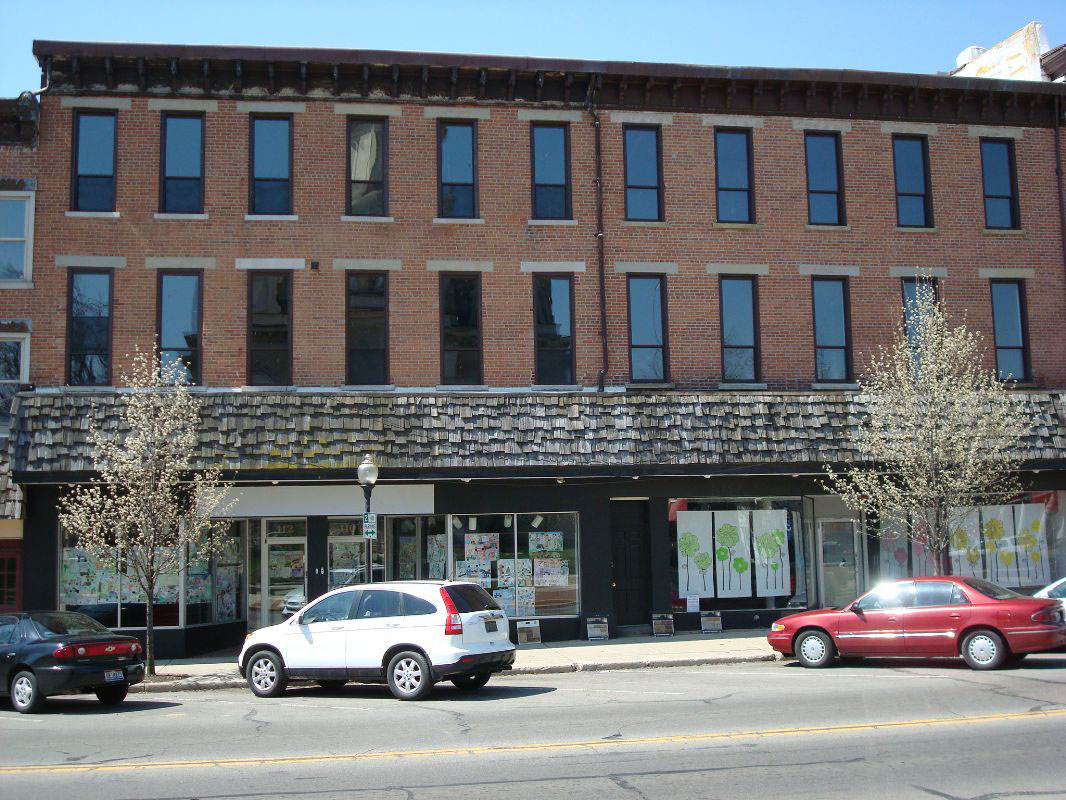 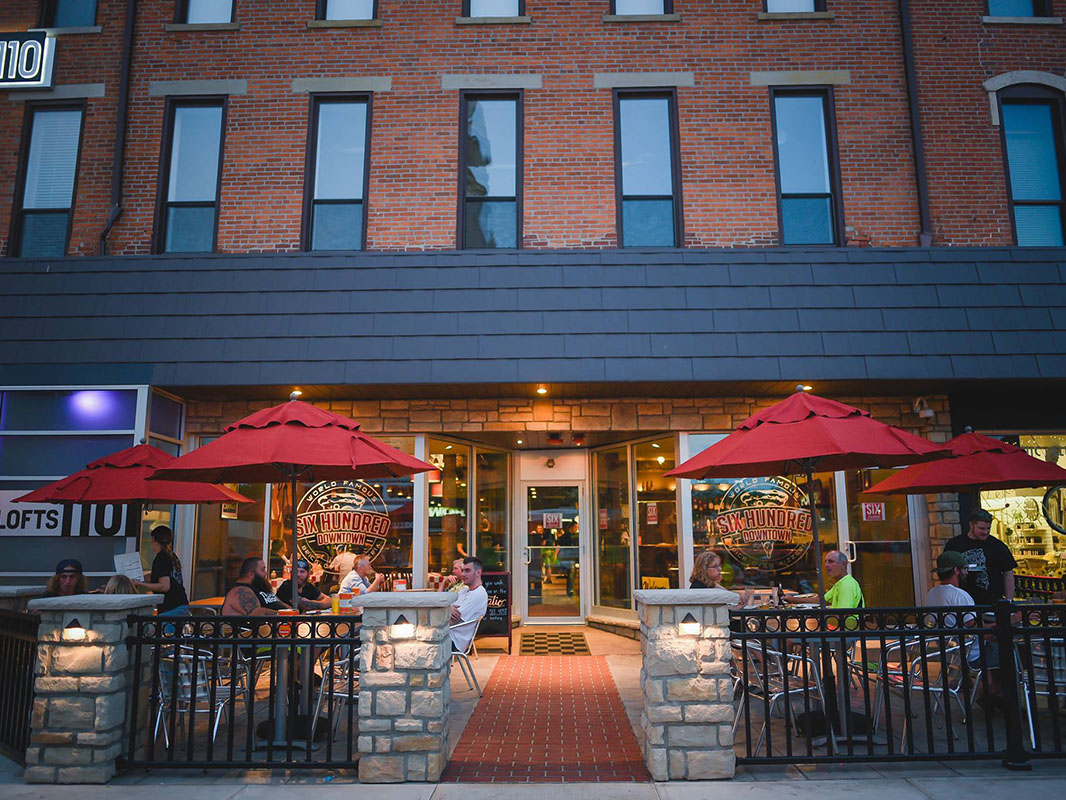 In small towns especially, envisioning the future requires the ability to see beyond barriers.

In the beginning, the Small Nation team knew three things:

Bringing people back downtown was going to require the acquisition of the shuttered and dilapidated buildings and some creative and strategic renovation. The ultimate goal would be to begin with a project that brought the most traffic to the area. They were probably going to have to do it all themselves.

One of Small Nation’s first real estate purchases were a block of three storefronts that once were home to JC Penny and Uhlman’s Department Stores. Although the building was completely vacant and in need of serious rehabilitation due to structural damage on the upper floors ’ truss system, the Small Nation team saw potential and were dedicated to creating something that would be an asset to the community.

While others saw an eyesore with no future, the Small Nation Team asked these questions instead:

“What is this building’s highest and best use?”
“What tenants will immediately add value to the downtown and cause an increase in traffic?”

Restaurants, especially those that are privately owned with unique, one of a kind offerings and exciting environments are a huge benefit to downtowns throughout small town America. Every single day, community restaurants bring entire rooms full of hungry, happy people “to the table” in their very own small town. An enjoyable dining experience keeps customers within the city limits instead of traveling to the next town to spend their time and dollars. When people leave their tables with full bellies and happy hearts, they also tend to linger, exploring neighboring businesses as well. That means people are out on the street. The neighborhood becomes animated. People see their neighbors and want to see what all the fuss is about. What was once only a place of daytime commerce extends business hours into the evening as well. Small town restaurants are about much more than food. If planned and placed correctly, they can become the beating heart of a community.

Finding a restaurant that filled a “food gap” in the community became our mission. Small Nation team leader Jason Duff had eaten some killer pizza in a neighboring town. Michael Shepherd, the owner of the pizzaria, had recently been featured on the Food Network and was a founder of the World Pizza Games. His business already had multiple locations, and the team thought Bellefontaine was the perfect location for a third. Unfortunately Michael didn’t agree.
After two failed attempts to recruit him, Jason went back to talk Michael a third time. If there’s one thing our Hustle Hard experiences has taught us, it’s that the word “no” is simply a delayed version of “yes” when it comes to business. This time, Jason recognized practically everyone in the restaurant because they had driven 25 miles from Bellefontaine to eat! That was the deciding factor. Michael checked out the property and several months later, after significant renovation by the Small Nation team and a $200,000 investment in the right equipment and interior upfit for the job, Six Hundred Downtown Brick Oven Pizzeria opened its doors.

In 2018, Six Hundred celebrated its 7th year in business and has led the way for growth in downtown Bellefontaine. Brittany Saxton, who had been Shepherd’s prodigy and General Manager, purchased the business with financing assistance from the Small Nation Team and is leading the restaurant toward a strong future. Through our Hustle Hard approach, we have assisted Brittany in developing a growth strategy that includes expansion investments that will improve the property and its revenue potential. In partnership with the city, an outdoor patio was recently added featuring stone columns and umbrellas. The addition has made outdoor dining part of our downtown for the first time. Attention to the restaurant’s interior design has also been a priority. A new wine room featuring stone walls and brick ceilings was recently added to serve as a special events space for parties, corporate meeting space, and other community events. As a team, we developed a strategy for marketing the businesses through COMSTOR billboards and social media within our community and the surrounding areas to bring new and repeat traffic to our town and through Six Hundred’s doors. We work as a team to help provide every opportunity for success.

Small Nation’s Hustle Hard approach with Brittany as a partner is the perfect case study in achieving small business growth. Investing time and money in the building, the right people and growth strategies have opened doors far beyond our small community.

In 2017, Brittany brought Six Hundred to the national stage by competing on the Food Network’s “Guy’s Grocery Games Pizza Masters,” winning second place out of four celebrity pizza chefs. In the spring of 2018, Brittany was invited to speak at The White House beside President Donald Trump on the impact of tax cuts on her business and other small businesses across the Nation.

Brittany and her team compete nationally each year to hone their craft. Some of their recent awards include:

From what was once a vacant, shuttered building, Six Hundred now serves more than 100,000 unique customers each year and employs 38 full-time staff members.

Six Hundred Downtown is a small, privately owned restaurant that has big things to say. In 2018, owner Brittany Saxton was invited to be one of several small business owners to speak with President Trump about how tax cuts affect small business.

How? The HUSTLE HARD approach gave Brittany the tools for success and a platform for expressing her voice. Learn more about Six Hundred Downtown at 600downtown.com. 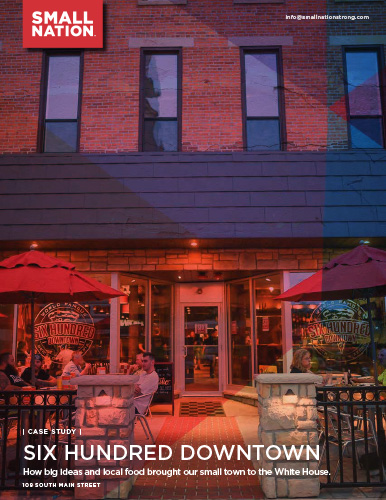