To overcome a pandemic, restaurateurs have to be as tough as iron

Matt Brown overcame bumps and made Iron City Sports Bar one of the most-loved restaurants in town. Then… COVID-19 changed absolutely everything. But not for long.

There is one word to best describe what makes independent restaurateurs successful: Perseverance. 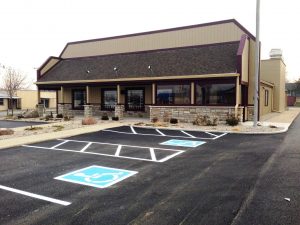 Here’s the truth about the restaurant game: The business is a lot harder than it looks. It’s fast, it’s hot, the margins are slim, and it requires agility and shrewd planning to stay on top of it all. Those who succeed work tirelessly to make it happen. Success for a small town restaurateur means going all-in and never, ever giving up… Even when it seems like the mountain may be too large to climb.

Restaurants in small towns can be real game changers for the local economy. When they are successful, they can shift the energy and dynamics of a community, creating a space for locals to gather and share, and engaging visitors to travel in from surrounding communities. When they aren’t successful, the empty spaces that remain after doors close have the potential to create a vacuum in the fabric of a local
area. When the regular foot traffic that restaurants bring to an area disappear and vacant spaces remain, it has a direct effect on surrounding businesses.

Small Nation knows that investing in the success of restaurants, especially those that are privately owned, is crucially important to the life and vitality of a town. As part of our redevelopment initiatives, we’ve worked to recruit independent restaurateurs with unique concepts as tenants, and we’ve even developed some concepts of our own.

In 2012, we purchased a restaurant site for $154,000 that was once the home of a large chain steakhouse. The site had been sitting vacant for 5 years at the time, and though some had tried to revive the space, none had succeeded long term.

There was a gap to fill on the south side of town in more ways than one. Demographics and foot traffic counts in that area of town wouldn’t support a franchise or another chain concept. Matt Brown, Small Nation’s Director of Leasing Development, showed the site to multiple potential tenants. None of them panned out as a match, but he learned a lot about scale, costing and operational models of the industry
during the process.

As time passed, Matt began forming ideas about what kind of restaurant would be the best fit for the community and for the size of the space. Bellefontaine didn’t have a sports bar. There wasn’t a place in town where members of the community could gather to watch a game. There were few places where Logan County’s local sports teams were supported. There was a gap. And if he couldn’t find someone to fill it then he would do it himself.

It was important to Matt that the new brand for the place reflected the community’s authentic identity. The Bellefontaine Bridge & Iron Company, founded in 1890, was located in the same neighborhood where the restaurant is today. “Iron City” was a nickname given by the locals to label the south end of town. The restaurant was named to honor that legacy and the hard working men and women who built the
company and the local community.

$150,000 was invested over a period of three months to renovate the space. Structural and operational improvements were made, including a new furnace/AC system, a metal roof and and parking lot resurfacing. Cosmetic improvements to the building were also made that helped
transition the perception of the “old steakhouse” into something that was new and full of potential. Stone elements were added to the facade and new backlit signage was installed on the exterior. The interior was also updated to reflect the new brand. The use of corrugated metal panels and large drum lighting were installed to give the space an industrial feel, supporting the newly developed brand. 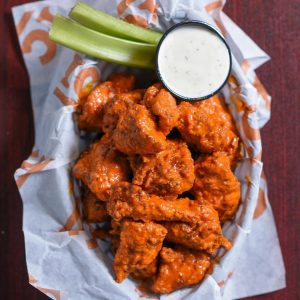 It wasn’t a completely smooth road. Like almost all other small restaurants, there were startup hiccups and it took some time to iron out the scale and staffing of such a large space. As Matt Brown stated so perfectly, “it took two and a half years of feeling like we were falling down a flight of stairs to figure out how to best fill the community’s needs and successfully manage the operations of this place.” In 2019, Iron City found their stride, zeroed in on their margins and began to rise above their startup bumps to see profit and a vision for true success. Today, the restaurant has become Bellefontaine’s “game day destination,” serving their famous boneless wings, monster hand-crafted burgers,
steaks, mac and cheese, and plenty of unique appetizers. The bar offers 15 taps serving cold beer, along with a full bar and cocktail menu. Things were going great.

The restaurant industry operates on notoriously low margins. Socio-economic shifts and inventory costs have a definite impact on the food service industry as a whole. When the COVID-19 pandemic crisis hit in the spring of 2020 and Ohio’s governor issued shut-down orders for restaurants and bars, many in the industry became paralyzed by the fear of economic collapse.

Iron City wasn’t one of them. They had been through bumps before and they would weather the storm again. The restaurant shut their doors immediately when the mandate was passed, and used that time to strategize about their next moves. 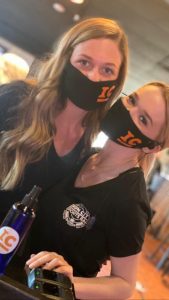 Like many privately owned restaurants in small towns, Iron City was primarily dine-in only, so if they were to survive, they had to learn quickly, pivot not only their business model, but their operations model, and then market those changes to the public in a time when information overload was a very real thing. Some restaurants scaled back economically during this time. Iron City invested in a brand new
way of doing business.

One of the first changes that was made was adding online ordering to their website. While a large portion of people still pick up the phone to call in a carry out order, many are more likely to place an order if they can do it quickly on the computer or from their smartphone. This turned out to be one of the smartest choices made during this time because now — even after reopening to dine in service — online orders account for 25% of their total orders, and this continues to increase week over week.

They invested in a new KDS (Kitchen Display Screens) system that would help streamline and enhance the efficiency in the kitchen when orders came in. Iron City’s carryout packaging was updated as well. Matt and team analyzed their packaging, implementing packaging that kept their food hot, fresh and safe for their customers. 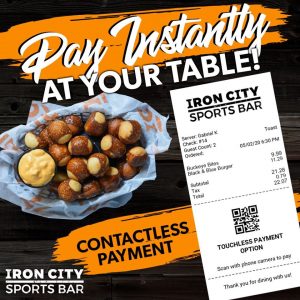 Changes were also made to the interior. They knew that when dine-in service began again, they would have limited capacity for seating due to social distance requirements. To allow more space between tables, they removed two walls from the original floor plan. Part of the waiting room area became a carryout kiosk station. A point of sale monitor was installed near the front door, as well as a carryout rack system where orders were placed when they were ready to go.

Once the operational and structural changes were made, they had to get the word out to the community, so they invested in all-new window graphics that promoted carryout, delivery, online ordering and delicious looking pictures of their most popular menu items.

Iron City arose on the other side of the pandemic’s wrath because they made smart, fast, strategic choices and chose to push forward rather than giving up. They not only persevered in the face of one of the biggest sociological, economic and health crises of the century… they came out better positioned for the long haul because they invested in themselves. 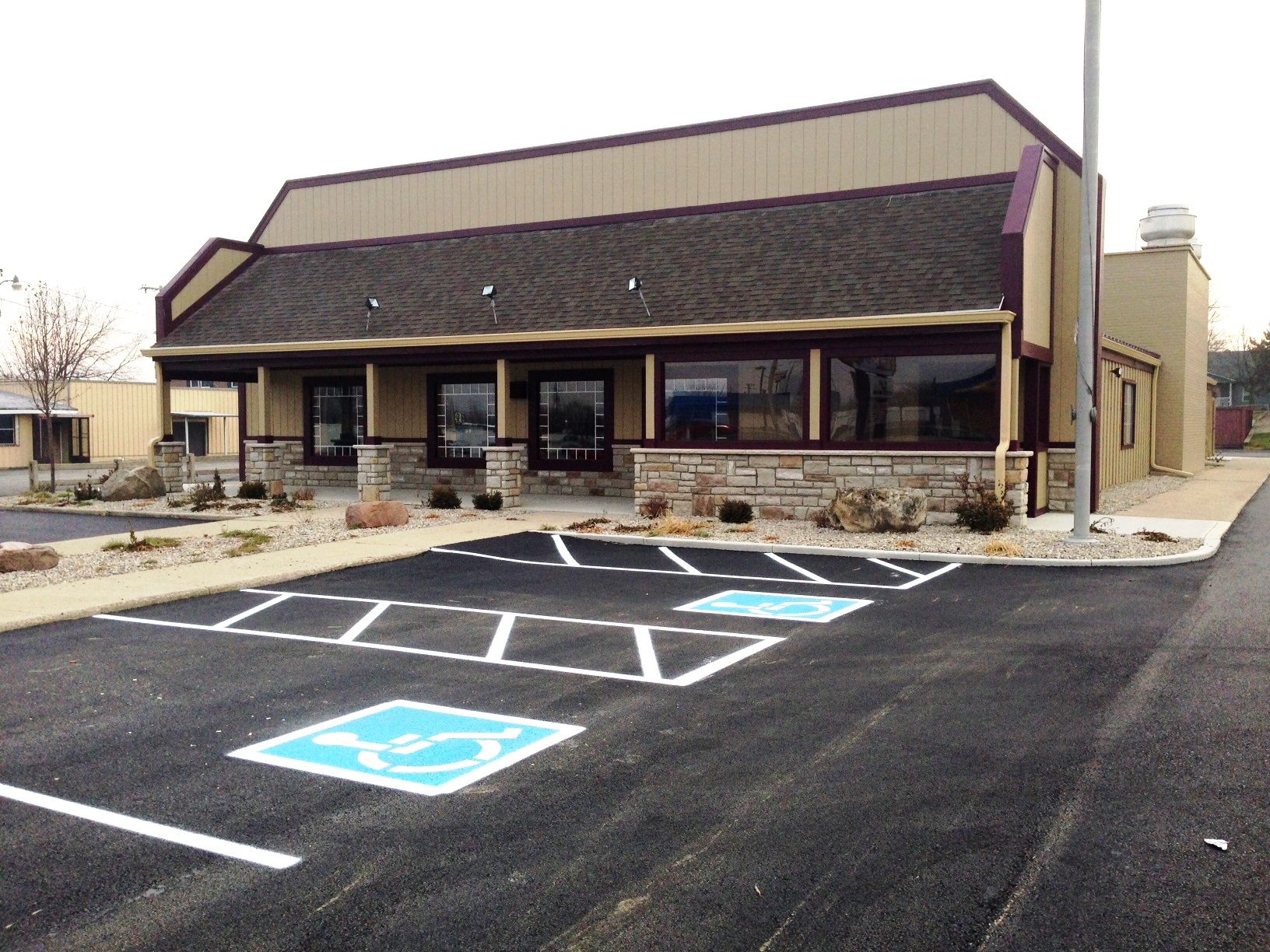 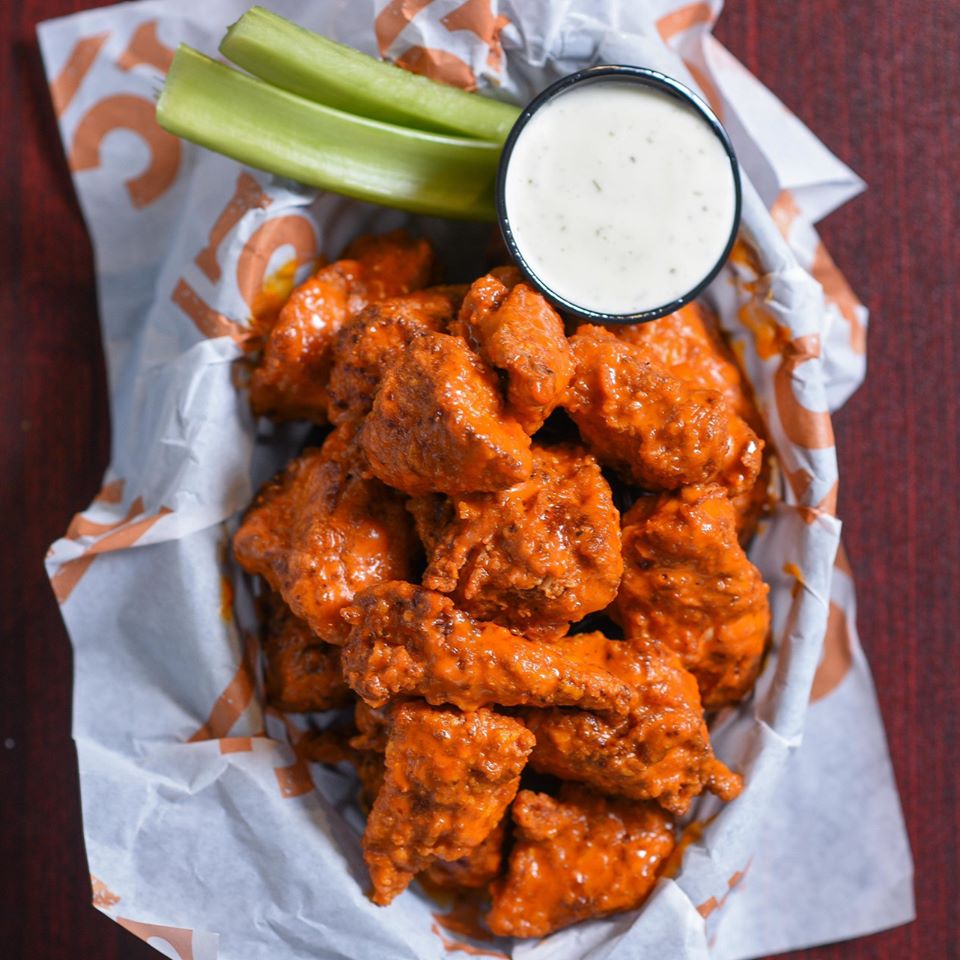 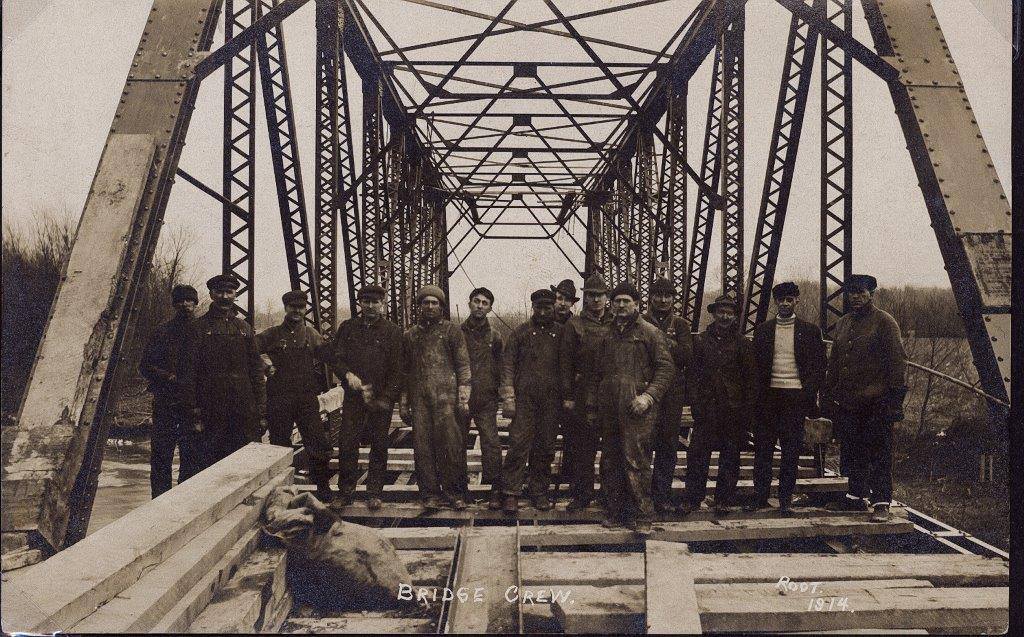 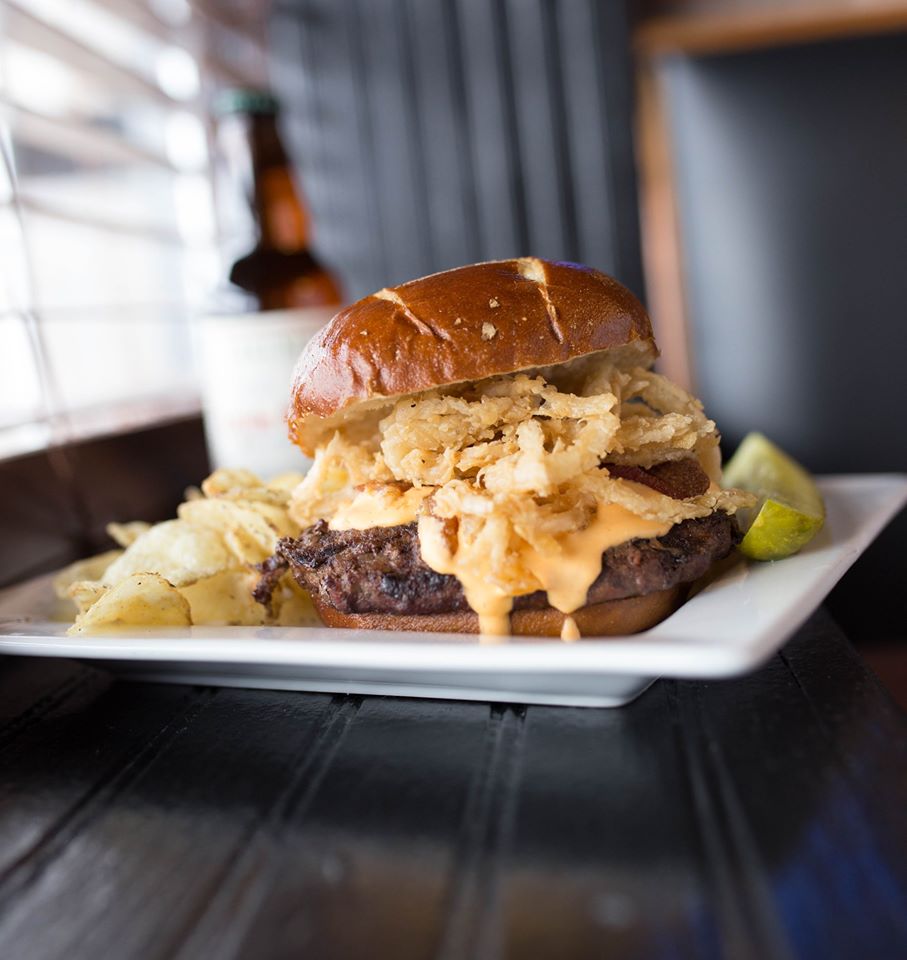 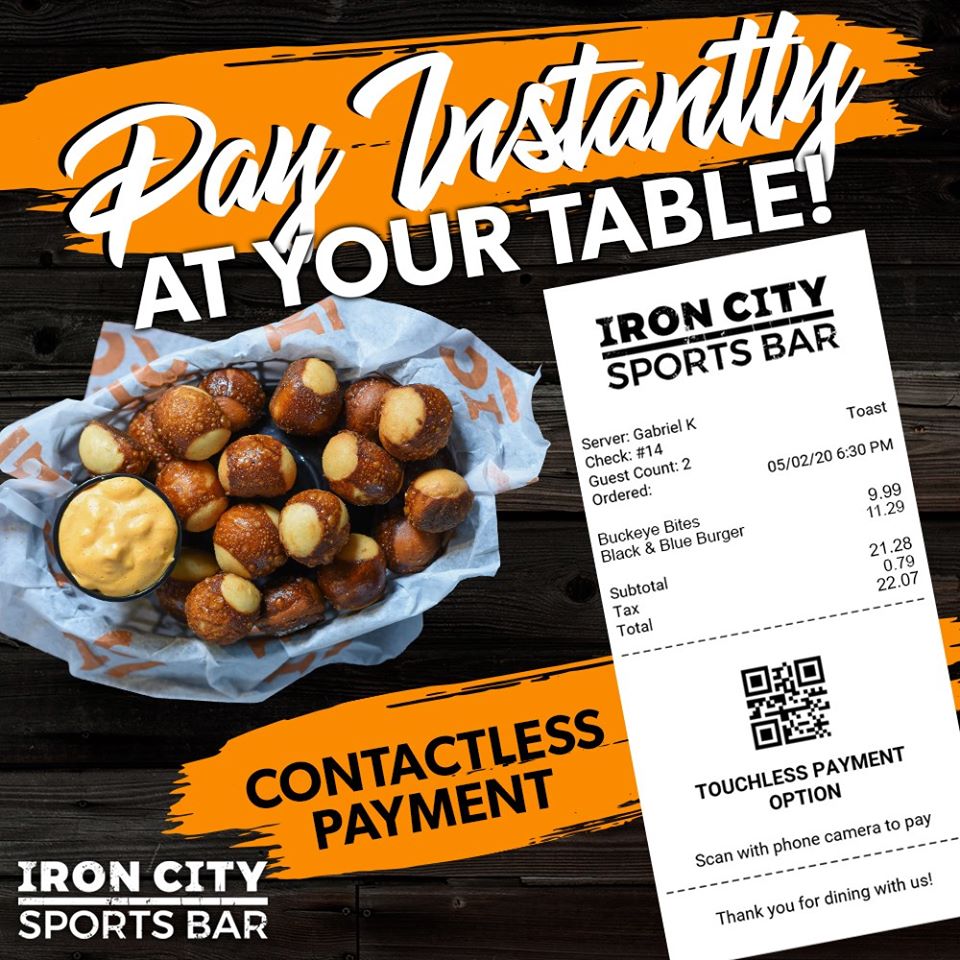 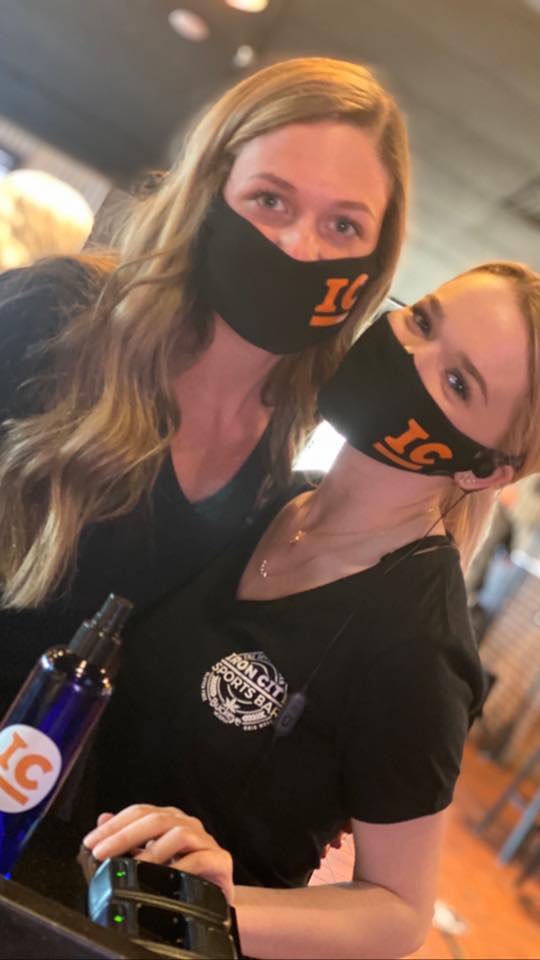 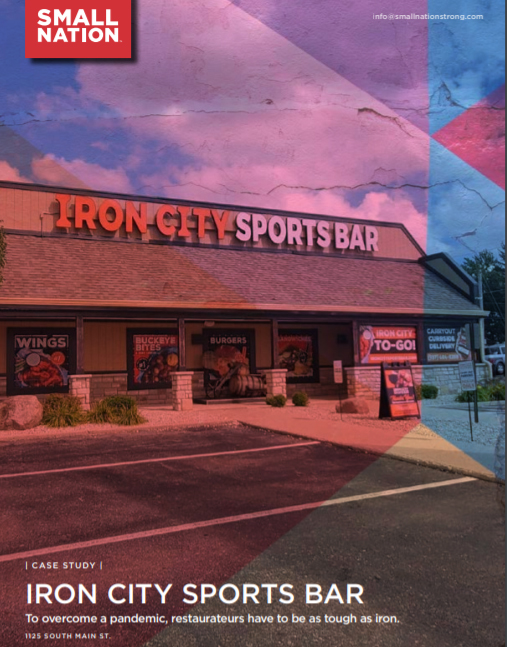