Time for a second career: How Lyle moved from California to bring fitness downtown

Lyle Endsley was born and raised in nearby Lima Ohio and like many, left the area when he was young to explore his potential in the world. When life changed and his father fell ill, he returned to West Central Ohio and began a new career that supported his passion for health and wellness.Small business entrepreneurship was his path in the second half of life.

Right now, all across the country, there are thousands upon thousands of young people who are counting the days until they can leave the small towns in which they were born and raised. It’s a sad but true story. Many of these kids are college bound high school graduates who won’t return because they don’t see enough jobs that support their chosen path. Others simply want to see more lifestyle options to keep them engaged, entertained and sustained. Keeping residents is an issue for small towns everywhere right now. Rural “brain drain” is a serious issue all across the country… but it doesn’t have to be that way.

Lyle Endsley was one of those people. He left his home in Lima at a young age to chase a career in the newspaper industry. For 30 years he had a career in distribution and marketing and moved from Columbus, Georgia, to a job with the Toledo Blade, then to the LA Times and finally the Sacramento Bee. Like many people who were raised in rural areas, he loved the atmosphere and energy of the city and couldn’t imagine how his small Ohio town could possibly compare.

In 2008, Lyle’s father fell ill and he made the decision to move back to the area from Los Angeles to be closer to his family. The newspaper jobs were obviously limited and he found himself searching for a brand new career in the second half of this life. It was a chance to consider his passions and make a choice that made him truly happy.

In LA, Lyle became dedicated to personal fitness. So dedicated in fact, that he would get up at 3AM so he could work out at a 24-hour gym before work. After returning to Ohio, he considered becoming a gym manager in order to continue doing what he loved. Lyle’s son, who was studying exercise science at the time, made a suggestion: “Dad, you love fitness. Why don’t you just buy a 24-hour gym and become an owner?” Small business entrepreneurship became Lyle’s answer to his second career dilemma back home. He opened his first Anytime Fitness location in Lima in 2009. A second location followed in Bellefontaine in 2011.

FROM STRIP MALL TO DOWNTOWN

Like many other gyms, Lyle’s Anytime Fitness was located in a nearby strip mall, and it operated successfully there for seven years. Strip mall locations with grocery stores and chain retail were the only commerce centers in small towns for a very long time, but things have begun to change. With the rise of online shopping for retail and people’s renewed desire for “experience over convenience,” traffic at strip mall locations has dwindled all across the country. In fact, even amid a surging economy, the vacancy rate at superregional malls rose to 8.6 percent in the second quarter of 2018—the worst rate since the third quarter of 2012, when the national and global economy were still reeling from the Great Recession.*

Lyle began feeling some of that impact at his location in Bellefontaine. The gym was still well attended, but there was energy growing in a different part of town, and he took notice. In 2015, Small Nation had been making some major changes to the downtown area. Restaurants, retail, upper floor living spaces and professional service business were popping up in the historic district and the community was supporting the area in kind. It was so energized and vibrant that Lyle decided to move there himself, becoming one of the first residents of Lofts 110, Bellefontaine’s first luxury loft living spaces.

After making the move, he connected with Small Nation for a tour of all of the projects they had been working on. They had a space available with 80 feet of window frontage that would support a gym, and believed that the new traffic and vibrance of the area would be a perfect match. The created a design-build agreement that would place the Anytime Fitness location next door to LoCo Depot, a local group cross functional training center led by Drew Melton. LoCo Depot is a family fitness center offering a variety of group training classes led by certified instructors, such as Off The Rails Performance Training, Fat Burning Bootcamp, Sport.

Training, personal trainers, StryKO boxing, LOCO Kids fitness classes and one of the only Fly Fit Bungee classes in the area.

Together, the Anytime Fitness and Loco Depot locations create an enormous 14,000 sf fitness complex right in the heart of all of the new downtown action, creating a single use development with multiple business owners all under one roof. Upstairs, Boyd Dance Studio offers family dance classes of all styles and a chiropractor will be joining the group of businesses in 2020. Between all of the businesses involved on both floors, this health centered community location will occupy over 21,000 square feet in total.

In prior years, Lyle’s new space had been a Montgomery Ward department store, and then an antique mall. It had been sitting empty for 25 years before the Small Nation team began renovations. Small Nation purchased the building in 2018 for $21,000 and invested $1.25 million in the renovation of the space

Today, Lyle loves the fact that he has returned to his small town roots. He compares the energy that has been creat-ed in downtown Bellefontaine to a “mini Chicago.” It’s full of unique locally-owned shops and businesses that truly support the physical and economic health of the community. It is possible for small towns to shift their perception of limit and lack by proactively and strategically creating an interesting and energy-filled atmosphere for growth. People feel it when investment has been made in the community. It becomes a place young people can envision themselves living, or like Lyle, returning and reinvesting in growth for future generations.

By relocating to a space that housed similar businesses, AnytimeFitness and Loco Depot have been able to create a one-stop 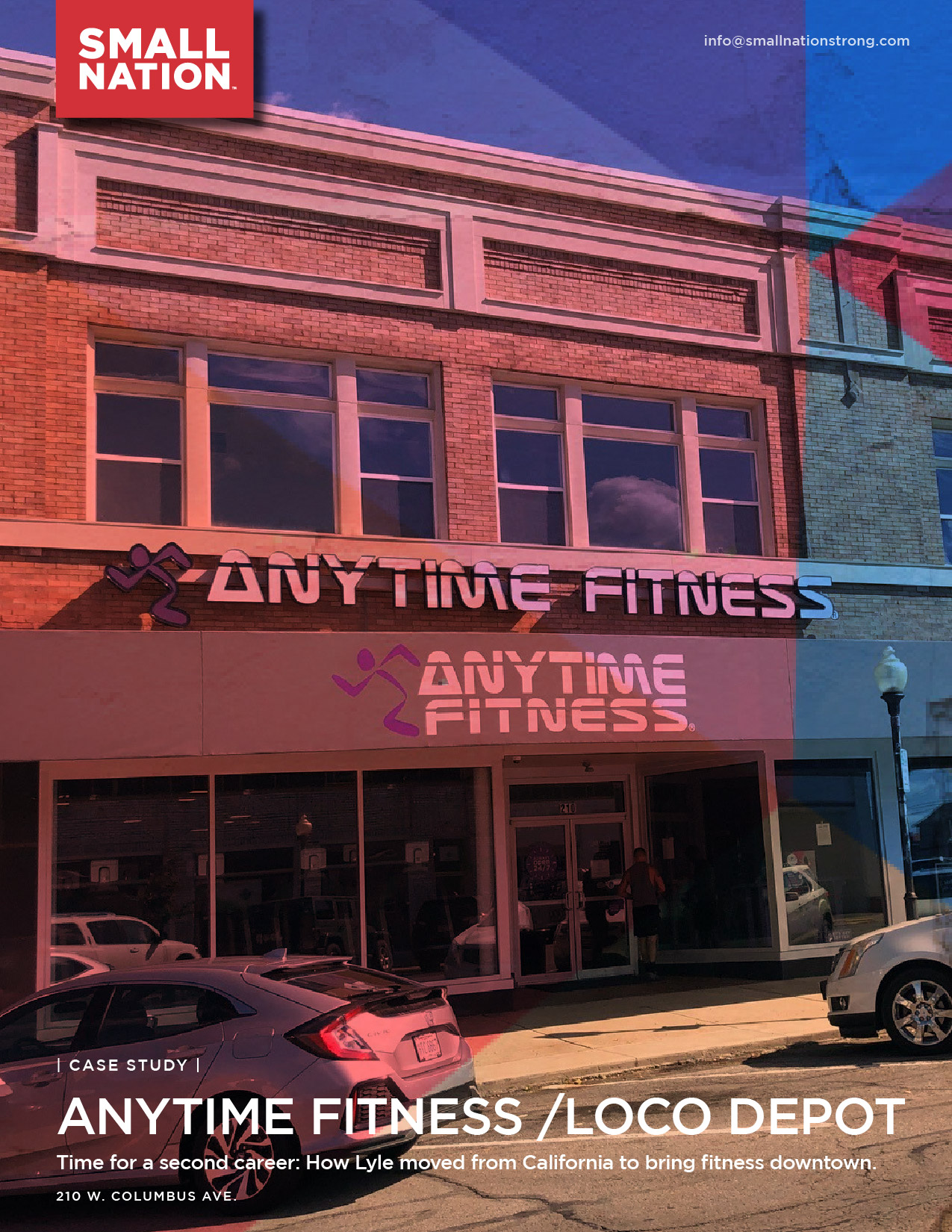